Amazing Thailand – always amazes you! (Part2) | Getting around the wonders of Bangkok

This day promised a great adventure that almost turned into a misadventure. Canopy Adventures is Asia’s longest cable ride/zip line covering over 3 km via 16 cables connecting 23 platforms. We booked our ticket via their online website. Little did we know and no one from the company informed us that their online booking for Pattaya is at the moment experiencing some technical issues.

Equipped with the printed ticket, we went off very early in the morning to the agreed pick-up point in the website. At around 6:30 AM we are already at Central Festival in Pattaya. Pick-up time is 8:00 AM. We waited for the service till 9:00AM but no one arrived. We tried calling the number indicated in the ticket but no one is answering. We decided to go to their office but we just ended not finding it as looking for an address in Thailand is very difficult if you do not have the exact location. Exact meaning up to the last possible part of an address should not be missing or else even locals and taxi drivers cannot help you. Plus most locals cannot speak English so you will definitely left on your own. After almost an hour of taxi joyride, we were able to contact them but they gave us another number to call. They said we should call that number because they have a staff there who knows how to speak English. So we called that number and it’s their office in the other side of Thailand where ever that is. They informed us that they are having technical issues in the online booking in Pattaya office. They apologize to us so many times and that made us cool down. They tried to make-up with us by accommodating our morning ticket in the afternoon slot.

Around 12:00NN, we were picked by a van in front of Central Festival together with other foreign tourists and started another hour of journey along the royal roads of Pattaya going to the exact location of the rainforest where the canopies are set.

Below is a video I found in youtube. Unfortunately we didn’t have much pictures and videos to show. Hopefully they will add an extra feature of free videos and pictures in the adventure so people won’t bother getting their own. 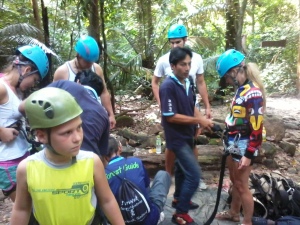 At the base camp, we were given a training lesson on how we can break and allow ourselves to stop. Each one in the group was required to pass through the training cable to get a feel on how to stop on your own.

After the training, we had a few minutes of mountain hiking to reach the first platform. The hiking is never easy. You will really get tired and sweat all out, but the initial hardships are exchanged with fun and excitement.

Towards near the end of the ride, the cable ride staffs will play a prank on you. See the only video I was able to get:

We were flying like birds and gliding like animals in the air while being suspended above the lush rainforest. Platforms are based on towering trees. Once you get-off the first platform, you have no other way to climb down but to finish the ride. Unless you are Spiderman, you can crawl on your way down the trees. The whole adventure will take two (2) hours to finish and the actual cable ride is at one (1) hour and 30 minutes.

After that, a free sumptuous meal is waiting for everyone at the reception area.

Amazing Thailand – always amazes you! (Part2) | Getting around the wonders of Bangkok

Day 3-5 was spent in Cambodia, the Kingdom of wonders where the royal civilization of Angkor flourished. Related entry can be found in below link:

Siem Reap, Cambodia | Splendors of the Khmer Civilization, the Royal roads to Angkor…

Day 5 from Siem Reap to Bangkok…

Typical scene in the busy streets of Bangkok.

Fifth day is basically spent on the road as we travel back from Siem Reap, Cambodia to Bangkok, Thailand. Got some dinner then off to another road travel going back to Bangsaen, Chon Buri. 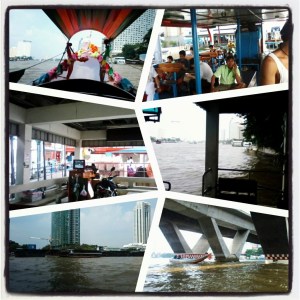 We travelled back to Bangkok since this day is planned as the Grand Palace and Reclining Buddha day. We rode on a BTS Sky Train (MRT/LRT in the Philippines and Singapore, KL Monorail in Kuala Lumpur) and alighted at Saphan Taksin station. The station is situated a few walk from a river taxi terminal beside the mighty Chao Phraya River. 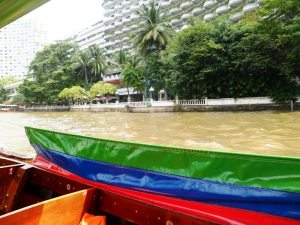 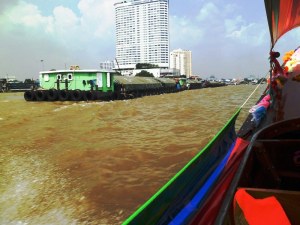 This river is the countries main, it flows through Bangkok and exits the Gulf of Thailand in the south. Riding the ferry or a river taxi is fun. The water current and the river waves are strong that you can feel they can really move a small ferry off its course. In just a few minutes, we stopped in a river taxi terminal a few steps away from the Grand Palace.

I can’t find my own words to narrate about this palace. I’m just in awe remembering the printed design on that childhood shirt I used to wear. I am standing right in front of that landmark. Anyway, below is how the “Guide to the Grand Palace” describes it.

“The Grand Palace” complex was established in 1782 and it consists of not only the royal residence and throne halls, but also a number of government offices as well as the renowned Temple of the Emerald Buddha. It covers an area of 218,000 square meters in length.

After King Rama I ascended to the throne in 1782, the palace was built. Prior to this, the royal palace and center of administration had been located in Thonburi, on the west side of Chao Phraya River. For various reasons, the new king considered the former capital to be unsuitable and decided to establish a new capital on the other side of the river. By his royal command, a new palace was built to serve not only as his royal residence but also as a site of administrative offices. The royal compound has been known since as the Grand Palace.” 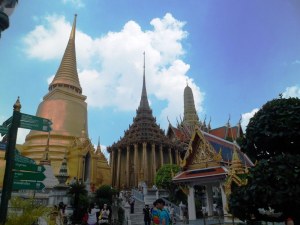 Not far from the Grand Palace is the “Wat Pho” or the Temple of the Reclining Buddha”. You can ride a tuk-tuk or just walk from the Grand Palace to get to this temple as it is situated just near beside the palace complex. The temple observes some rules. Visitors must be dressed properly and appropriately. Ladies wearing sleeveless are not permitted to enter unless they wear a shirt or at least wrap around a cloth. You must remove your footwear before entering the temple. Bags are provided in the entrance for you to put your foot wears and carry them along with you. Going in with socks is just fine.What I like the most is that, fruit and fresh fruit extract vendors abound in the area. 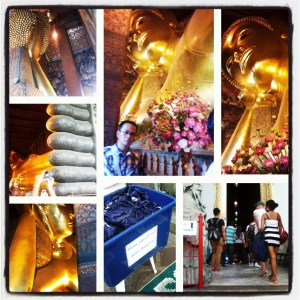 After that we went to Siam (Sayάm) Center, took some lunch at Siam Paragon and went shopping at the Central World. Great buys are almost everywhere. 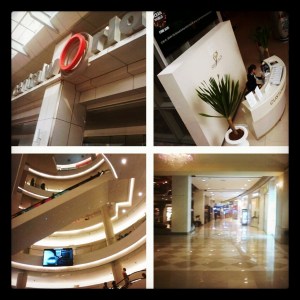